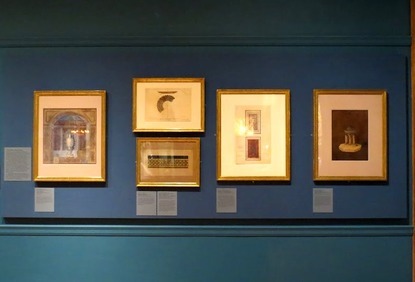 The 1870's was a time of redefinition in American culture. The Industrial Revolution changed the way Americans lived,and design reform changed the way American culture looked. In their search for good design, many artists, including members of the Aesthetic Movement, whose mantra “art for art’s sake” encouraged beauty over practicality, turned to the arts of Japan, China, and the Middle East for inspiration.

Louis C. Tiffany began his career as a painter in the 1860's. He started his first decorative firm, the Associated Artists, during the pinnacle of the Aesthetic Movement, which strongly influenced his designs, as well as his interest in the art of the East. During this formative period in his
artistic career, he traveled through Europe and Northern Africa, studying the art, architecture, and culture. His travels fostered a love of the exotic, which he integrated into his painting and decorative arts made for both domestic and religious contexts.

The drawings here illustrate Tiffany’s integration of Islamic design elements into his work. Outliving the influence of the Aesthetic Movement, arts of the East continued to drive Tiffany’s design until the end of his career, as is evidenced by the late dates of some of these drawings.